Can I be found at fault if my car is rear-ended in a crash? 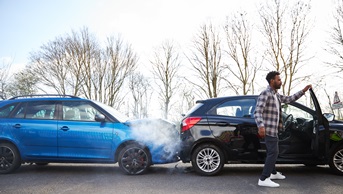 In most cases, the driver of the car that is hit from behind in Virginia will not be held liable in a crash. This is because Virginia law requires drivers to be attentive and to drive with a safe following distance, so rear-end accidents are usually the fault of the driver who violates this law and hits the car in front of them.

However, if you were operating your car in an unsafe or illegal manner, and your actions caused the driver behind you to hit your car, then you could be found liable. A Front Royal car accident attorney can help determine liability.

Most rear-end car crashes are caused by an inattentive driver hitting the car in front of them. Virginia places responsibility on the following driver to maintain a safe distance and to be alert to changes in speed, sudden stops, traffic back-ups, and other events that require them to slow down or stop. If a car is slammed from behind when stopped at a red light or stop sign, a car accident attorney will have an easy time proving that the rear driver was at fault.

However, a driver cannot be held responsible for hitting you when your actions made it impossible for them to avoid an accident. The following are some instances when the driver of the car that was hit may be at fault for causing the accident:

Whether you were the car in front that was hit, or the car behind that hit another car, you should talk to a car accident lawyer about liability if you were seriously injured and do not believe it was your fault. A skilled attorney can help you prove that the other driver was at fault and get you the compensation you need to pay medical bills, lost wages, pain and suffering damages, and more.

If you have been involved in a rear-end car accident, the attorneys at Dulaney, Lauer & Thomas LLP can help you sort out the accident scene to determine who is really at fault and who deserves to be compensated for the damages. Contact us through our online contact form or at 540-636-7100.

by Richard A. Dulaney [email protected]
Connect with me
Richard has over 30 years of experience in personal injury law.