Who is at fault in a right turn accident in Virginia? 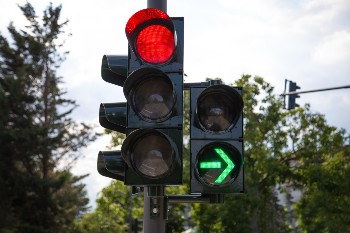 Determining fault in a right-turn accident in Virginia requires information specific to the accident. Generally, a motorist turning onto a street with moving traffic must yield the right of way.

If there’s a stop sign, you must come to a full stop and turn right only when the intersection is clear. Right turns are also permitted at a traffic light that is steadily red as long as there’s no sign indicating that they’re not.

If you’re turning right on red, however, you’re required to come to a complete stop before reaching the limit line. You must then look both left and right to be sure no vehicles are in or about to enter the intersection, and no pedestrians or cyclists are crossing the street onto which you’re turning. You may then enter the intersection cautiously, using your turn signal and staying as close as possible to the curb on your right.

At many intersections, these right-turn regulations are automatically enforced by cameras. If you fail to come to a stop before turning right, you’ll probably receive a traffic citation in the mail. If your negligent turn results in an accident, you’re at fault because you’re in violation of the law at the time of the crash. The victim of the accident may file a claim against your insurance company for damages:

If, on the other hand, you’re the victim of a crash caused by someone else turning right illegally, you may file a claim for your damages with that at-fault driver’s insurance company.

In some right-turn accidents, the fault for the wreck is shared by both parties involved. The driver turning right might negligently fail to yield the right of way and collide with a car coming through the intersection on a green light. If the driver of that car happens to be traveling over the speed limit, however, both drivers then bear partial responsibility for the accident because both are in violation of the law.

In most states in the U.S., accident investigators assign a percentage of fault to each motorist, and the one with the smaller proportion of fault collects compensation from the other, with the award reduced according to the amount of fault assigned to the plaintiff.

Virginia, however, is one of four states that follow a strict contributory negligence rule. This means that a driver who bears even one percent of the fault for a crash in Virginia is barred from collecting any compensation at all from the primarily at-fault driver.

For example, the police report of your accident might indicate that you caused the accident by making an illegal right turn, but if it shows that the other driver was partially responsible due to speeding or another violation, that driver may not collect any damages from you.

If, on the other hand, you’re the victim of a crash caused by a driver turning right illegally, you may collect damages from that driver’s insurer if you bear no fault whatsoever. If you’re found partially responsible for the wreck, though, you may collect nothing from the primarily at-fault driver.

The Need for a Car Accident Attorney

The contributory negligence rule makes proving complete liability for an accident crucial to your insurance claim.

The insurer of the at-fault driver will do its best to show you’re partially responsible for any crash in which you’re involved. It will use your partial fault as leverage to dispute your claim or offer you a quick, low settlement. For this reason, you should never give a statement to an insurance adjuster who contacts you after the wreck. Simply refer the adjuster to your lawyer.

The insurer will have its own attorneys working to prove your partial fault in order to save money for the company’s shareholders, and the average person really doesn’t stand a chance when going up against experienced insurance company attorneys.

It’s vital to have a car accident lawyer in your corner to negotiate on your behalf with the other driver’s insurer. Your lawyer can help you seek fair compensation by:

Consulting an experienced car accident attorney is your first step toward justice.

Contact us online or call us at 540-341-0007 to schedule your free consultation. You pay no attorney fees until we win your case.