Tips for Driving Safely in Virginia This Fall 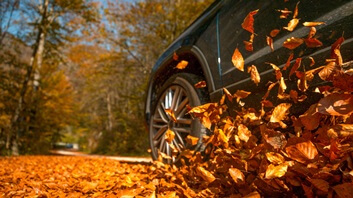 While winter is generally considered the most dangerous season for motorists, fall presents its own set of driving challenges. As summer fades away and autumn sets in, following the tips below can help you to stay safe on the roads around Warrenton, Culpeper, and Front Royal.

Colorful and Fallen Leaves Can Be Hazardous

The changing colors of the trees in the fall are so beautiful that many motorists take family car trips just to look at the leaves. If you’re the driver, though, keeping your eyes on the road is vital for your safety. Be cautious in case cars near you slow down or pull over to take photos. It’s also important to remember that a patch of wet leaves can be just as slippery as a patch of ice or snow.

Children often play in raked leaves during the fall and hide inside the piles, so try to drive around, not over, any pile of leaves in or near the road. Avoid parking near a pile of leaves, as well, in case someone should burn them. It’s also possible that your catalytic converter or exhaust could ignite a pile of dry leaves. Finally, leaves can stick to and obscure traffic signs and signals, so be extra careful when entering an intersection or merging with other lanes of traffic.

Fall is the time when frost first appears on car windows in the morning. Be sure that your defroster is working well. Give yourself a few extra minutes in the morning to scrape your windows if necessary. Frost on bridges and flyovers can be slippery, so slow down and be safe. Make sure that your tires have plenty of tread and are properly inflated for optimum safety in inclement weather.

As temperatures drop, you’re more likely to encounter fog, which hinders your vision and depth perception. Slow down and watch even more carefully than you usually do for people walking or riding bikes. Don’t turn on your high beams; they reduce visibility even more.

Be Alert for Deer on Roadways

The deer population in the U.S. is increasing while deer habitats are shrinking due to the clearing of land for housing and other development. This means there are more deer than ever on the roads, especially from October through December, between dusk and dawn. According to the Insurance Institute of Highway Safety, your chances of striking a deer are more than three times as great in November as in any other month.

When you’re driving after dark in the fall, especially in rural and semi-rural areas, slow down and train yourself to watch the sides of the road for deer. Their eyes often reflect your headlights, and they frequently travel in groups of two or three, so where there is one, there could be others waiting to run across the road.

Be Prepared for Low-Light Driving

As the number of daylight hours decreases, you’ll spend more time driving in the dark, so be sure that your headlights and taillights are working properly. Wear corrective lenses if you need them in order to see the road and other vehicles as well as possible. Watch closely for pedestrians and bicyclists.

When the days grow shorter, the sun rises later and sets earlier, often creating a strong glare during morning and late afternoon rush hours. It’s a good idea to keep your windows clean, wear sunglasses, and use your sun visors to keep the glare out of your eyes while you’re driving. You can also purchase nighttime glasses with anti-glare coating to keep you from being blinded by the extremely bright headlights that are common on many new vehicles today.

Be on the Lookout for Children

Most schools begin the academic year in late August or early September, so watch carefully for children walking in school zones and near school buses, especially early in the morning when it’s still dark. There might also be inexperienced teenage motorists driving to school for the first time, so be patient and extremely cautious near them. Don’t tailgate or blow your horn unless it’s necessary for safety.

Consult an Attorney If You Have an Accident

Even if you’re taking all reasonable precautions for fall driving, other motorists on the road might not be so vigilant. If you’re involved in an accident caused by another driver, you’re entitled to file a claim against the at-fault party’s insurance company for your medical expenses, property damage, lost income, and pain and suffering.

You’re more likely to receive fair compensation for your damages with the help of an experienced car accident attorney than you are without one. Contact us online or call us at 540-341-0007 to schedule your free consultation. You pay no attorney fees until we win your case.