Is it illegal to drive while wearing headphones in Virginia? 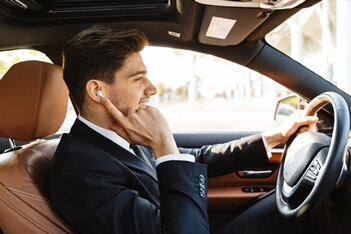 Yes, it is illegal for any driver with headphones or earbuds in both ears to operate a vehicle on Virginia’s streets, roads, or highways. Earphones interfere with a motorist’s ability to hear car horns and other traffic sounds that might warn of danger. This means they impede the driver’s ability to react to vehicles or pedestrians nearby and increase the chances of an accident.

If you’re injured in a crash caused by a driver who’s talking on a phone or listening to music with earphones in both ears, you’re entitled to file a claim against that driver’s insurance company for your damages: medical bills, property damage, lost income, emotional trauma, and physical pain and suffering.

Exceptions to the Headphones Law

There are a few exceptions to Virginia’s no-earphone laws:

A driver who is using earphones and does not fall into one of the excepted categories above is in violation of the law and could be held strictly liable for causing your accident.

The Role of Contributory Negligence

Proving that the driver who caused your wreck was in violation of the law at the time of the crash can be very helpful to your claim because of Virginia’s strict contributory negligence rule in personal injury cases. Most other states allow you to receive compensation for your damages even if you are partially at fault for your accident. Your award is simply reduced according to your percentage of fault—as long as it’s less than that of the other driver. In Virginia, however, you may not collect any compensation whatsoever if you are found to be even one percent responsible for the wreck that injured you.

For this reason, the other driver’s insurer, which is in business to make a profit above all else, will do everything it can to show that you were partially at fault in order to avoid paying your claim. If you can prove that the at-fault driver was using headphones, it will be harder for the insurance company to show that you contributed to the crash. For this reason, you’re well advised to consult an experienced attorney in a car accident claim involving the use of headphones or earbuds by the at-fault driver.

Helping Your Lawyer to Help You

In addition to informing your lawyer that you have reason to think the responsible driver was using earphones, there are several things you can do after your accident to gather evidence that shows the other driver’s responsibility for your crash. If you’re physically able to do so, take the following steps at the scene of the wreck:

Your attorney can investigate your crash thoroughly, perhaps with the help of an accident reconstructionist, and work to prove the driver using earphones is 100% liable for your damages.

Have You Been Injured in a Crash Caused by a Driver Using Headphones?

Take the first step toward justice by consulting an experienced car accident attorney. Contact us online or call us at 540-341-0007 to schedule your free consultation. You pay no attorney fees until we win your case.