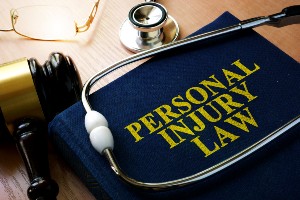 A personal injury occurs when another party commits a negligent or intentional act that does damage to your body, mind, or emotions. Examples include vehicle accidents, pedestrian mishaps, dog bites, medical malpractice, wrongful death, and product or premises liability. If you’re the victim of a personal injury, you generally may file an insurance claim or a civil lawsuit against the at-fault party for your damages, but personal injury laws can vary from state to state. Below are some defining features of Virginia's personal injury law.

A personal injury may be inflicted intentionally or as a result of negligence, which is a breach of the duty to exercise reasonable care for others in any given situation. The negligent party is liable for the damage caused to others by such a breach of duty.

In some cases, more than one party might share the fault for an accidental injury. If you’re driving with a burnt-out headlight, for example, when another vehicle runs a red light and strikes your car, you might be found to have contributed to the accident. In most states, if your percentage of fault is less than that of the other party, you may still collect compensation for your medical bills, property damage, lost income, and pain and suffering. Your award will simply be reduced according to your percentage of fault. In Virginia, however, you will be barred from collecting any compensation if you are found even one percent responsible for your own accident. For this reason, it’s a good idea to have a lawyer who’s familiar with VA personal injury law and can work to prove the at-fault party is entirely liable for your accidental injury.

The only situation in which VA’s contributory negligence law does not apply is one in which you’re injured by a common carrier (a bus, train, or plane) that is in violation of a state safety regulation. In such a case, even if you’ve done something to contribute partially to your accidental injury, you may still collect compensation for your damages.

In Virginia, you have two years to file a lawsuit for personal injury, defamation, or fraud. The statute of limitations is extended to five years in cases of trespass, property damage, or a breached contract. Most personal injury suits, especially vehicle accidents, begin with a damage claim against the at-fault party’s insurer, and most cases are settled out of court. The insurers, however, might try to drag out your negotiations beyond the statute of limitations, weakening your position by eliminating your option of going to trial if a fair settlement is not offered. If you try to file a suit after the statute of limitations has run, your case will be dismissed. This is another reason to have an attorney in your corner to make sure you meet all court deadlines and procedural requirements in a personal injury claim.

As long as you file your suit within the time allowed by the statute of limitations, you typically have one year from the time of filing to serve the defendant notice of the suit. If notice is not served within that time, your case will be dismissed.

Virginia is one of only two states in the U.S. that allow a driver to pay an annual uninsured motorist fee and drive for the next 12 months without liability coverage, so it’s always possible that you could be injured by an uninsured motorist (UM) in Virginia. If you have UM coverage on your own auto insurance policy, you may file a claim for damages with your insurer. In the case of a hit-and-run accident, you may file a UM claim even if the hit-and-run driver is never caught.

In Virginia, joint and several liability law can be imposed. If more than one party is responsible for your personal injury, you may collect the entire amount of compensation awarded by the court from just one of the parties against whom the court has ruled, regardless of that party’s percentage of fault for the injury.

Virginia sets no damage caps on most personal injury cases. This means you may collect an unlimited amount of money for your injury if you can show evidence to convince the insurer or a court that it’s justified. Even if you collect money from a collateral source, that money will have no effect on the damages you may receive from your primary claim.

An exception to the cap is cases of medical malpractice. Medical malpractice awards are capped at $2 million, and punitive damages (which are sometimes awarded in cases of gross negligence or intentional misconduct) at $350,000.

A Virginia general district court, which is similar to a small claims court with relaxed rules of evidence and procedure, has jurisdiction over damage claims of up to $25,000. While a circuit court may also hear such cases, only a circuit court can hear cases seeking more than $25,000. A defendant in circuit court may demand a jury trial, in which a unanimous decision by all seven jurors is required for a verdict. Appeals from a general district court are heard by five jurors.

Have You Suffered a Personal Injury in Virginia?

Consulting an experienced personal injury attorney familiar with VA laws is your first step toward justice. Contact us online or call us at 540-341-0007 to schedule your free consultation. You pay no attorney fees until we win your case.