Seeking Compensation for Damages Caused by an Uninsured Motorist in Virginia 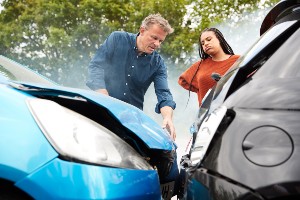 Virginia is one of only two states in the U.S. that allow a licensed driver to operate a motor vehicle without liability insurance. A Virginia driver may pay a $500 uninsured motorist fee at the time of registration and legally drive uninsured for the next 12 months. Approximately 10% of all VA drivers do so each year. If you’re injured in an accident caused by one of these uninsured drivers, you cannot simply file a claim for damages with that driver’s insurer, as you would in most cases. Instead, you have three options for seeking compensation for your medical expenses, property damage, lost income, and pain and suffering.

When you purchase auto insurance in VA, you can add uninsured motorist coverage to your policy. If you’ve done so, you can file a claim with your own insurance company for damages caused by an uninsured driver or hit-and-run driver (considered uninsured by default) responsible for your wreck. If your insurer pays your claim, it can then file a subrogation claim against the at-fault driver and try to recoup the compensation you’ve received.

In such a case, however, it’s possible that your own insurer could become your adversary, especially if your claim is an expensive one. The insurance company is in business to make a profit for its shareholders, not to pay out every claim it receives. To save money, its adjusters might offer you a quick, low settlement before you even know the extent of your damages. You should never accept such an offer without consulting a car accident attorney first.

Your insurer could also contend you are partially responsible for your own accident. Doing so would allow the company to deny your claim because VA’s strict contributory negligence rule prohibits you from collecting any compensation if you’re even one percent at fault. If, for example, you had a burned-out headlight or a broken turn signal at the time you were hit, the insurer could cite your faulty equipment as a partial cause of the crash and refuse to pay you a cent. The contributory negligence rule is just one reason why it’s important for you to have legal representation. The insurer will have a team of lawyers for whom you’re probably no match on your own, so you want to have a car accident attorney on your side to level the playing field.

There are a few scenarios in which you might seek compensation from a third party if the at-fault driver is uninsured:

Pursuing a third-party suit is a complex legal process requiring an experienced lawyer who can thoroughly investigate your accident and advise you on the best way to seek a fair recovery.

An at-fault driver who has paid the uninsured motorist fee is still liable for the damages you’ve suffered in the crash. If all else fails, you can file a civil lawsuit against that driver to seek compensation. If you’re successful and the driver has money in the bank or assets to liquidate in order to pay you, you can recover damages. In many cases, though, a driver without insurance does not have much in the way of money or assets to liquidate. Even if the court rules in your favor, you can’t get what the defendant does not have. An experienced car accident attorney can obtain the defendant’s financial information and advise you in regard to filing a lawsuit.

Have You Been Injured by an Uninsured Driver in Virginia?

An experienced car accident attorney can explain your options and help you seek fair compensation. Contact us online or call us at 540-341-0007 to schedule your free consultation. You pay no attorney fees until we win your case.

by Andrew Thomas [email protected]
Connect with me
Civil litigation attorney in Virginia and is AV Rated by Martindale-Hubbell.
Be the first to comment!
Post a Comment

The firm is focused on the customer and intent on providing the best possible service. Everett H. (Warrenton, VA)