Who is at fault in a wide truck turn accident in Virginia? 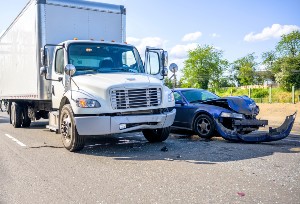 A truck driver may be held liable for an accident resulting from a wide turn if you can prove the trucker’s negligence caused a crash that injured you and/or damaged your vehicle.

It’s also possible that the trucking company, a truck mechanic, cargo-loading personnel, or a manufacturer bears partial responsibility for your damages, which include medical expenses, property damage, lost income, and physical pain and suffering.

The size of a semi-truck makes it impossible for a trucker to stay close to the curb as smaller vehicles do when turning at a right angle. In order to make such a turn, the trucker must first swing wide, often entering an adjacent lane in which cars may be traveling in the same or the opposite direction.

Wide truck turns can endanger other motorists by increasing the risk of an accident, especially on a two-lane road.

To qualify for a commercial driver’s license (CDL), a truck driver must be able to follow the turn guidelines in the CDL training manual, which instructs drivers to:

Not only the negligent truck driver who ignores these guidelines is liable for resulting damages; the trucker’s employer and other personnel may be held accountable, as well.

Other factors that cause wide turn wrecks include the failure to use turn signals, failure to check mirrors, misjudging the speed of nearby vehicles, defective equipment, backing up, insufficient training, distractions, fatigue, and drug or alcohol impairment.

The Role of Your Attorney

Due to the differences in size and weight between a commercial 18-wheeler and a passenger car, an accident involving the two often results in catastrophic injuries for the occupants of the car. Serious injuries mean high medical expenses and a long recovery period preventing you from working, so your insurance claim is likely to be an expensive one, which the insurers of the at-fault parties don’t want to pay. They’re likely to dispute your claim or offer you a quick, unfairly low settlement to save money for the company’s shareholders. In this case, it’s a good idea to have a truck accident lawyer to whom you can refer all communication with the insurer. Your attorney can also help you by:

Most truck accident attorneys will offer you a free first consultation, so you have nothing to lose and much to gain by consulting a lawyer.

Another reason to have an experienced attorney on your team is Virginia’s strict contributory negligence rule, which prevents you from collecting any damages if you’re found even one percent responsible for your own accident. The defendant’s insurer will have a team of attorneys working to prove you’re partially at fault, so you need a seasoned attorney in your corner to help prove the defendant’s total liability.

Have You Been Injured in a Wide-Turn Truck Accident in Virginia?

An experienced truck accident attorney can explain your options and tell you where you stand.

Contact us online or call us at 540-341-0007 to schedule your free consultation. You pay no attorney fees until we win your case.

Fill out this form, and our attorneys will get back to you immediately to discuss your case.
I consider you a friend and would gladly send anyone to your offices for counsel. Michael E. (Nokesville, VA)