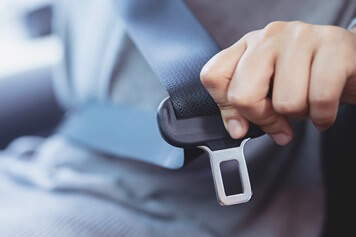 According to the National Highway Traffic Safety Administration (NHTSA), wearing a seatbelt reduces a driver’s or front seat passenger’s chance of injury or death in a car crash by approximately 50%. The Centers for Disease Control and Prevention (CDC) report that 90% of Americans use seatbelts, which save thousands of lives annually.

While seatbelt use is generally required in Virginia, there are some exceptions to state seatbelt laws. If you’re not wearing your seatbelt when involved in an accident caused by someone else, you still might be eligible to recover compensation for your damages, which include medical bills, property damage, lost income, and pain and suffering.

Virginia law requires almost all front seat passengers in a moving vehicle to wear seatbelts and all children younger than eight years of age to be secured in child safety seats. Passengers 18 or older can be ticketed for not complying with seatbelt laws, and the driver of a vehicle can be cited if any passenger under 18 is not properly belted. There are, however, some drivers and passengers who are not required to buckle up, including the following:

In most states across the country, a seatbelt violation is a primary offense. This means that a police officer may pull you over and cite you just for not wearing a seatbelt. In Virginia, though, most seatbelt infractions are secondary offenses. This means that you or your adult passengers can be ticketed for seatbelt violations only if you’re pulled over for another offense like speeding, driving under the influence (DUI), or running a red light or stop sign. Only if a minor is unbelted or improperly restrained can you be pulled over and cited for a primary seatbelt offense.

Drivers with child passengers in Virginia are required to use child safety seats according to the laws outlined below.

Children younger than two years of age must be secured in rear-facing safety seats until reaching the minimum weight listed by the seat manufacturer for a front-facing seat. Some newer rear-facing seats can be used by passengers who weigh up to 40 or 50 pounds, so a child under this weight limit can use the rear-facing seat even after the second birthday. If you have an active passenger-side airbag in the front seat, you should place the child’s rear-facing seat in the back seat of your vehicle.

A child older than two who outgrows the height and weight limits of a rear-facing seat may ride in the back of the vehicle in a forward-facing safety seat with a five-point harness until reaching the height/weight limits for that seat.

Child passengers who have outgrown the height/weight limits of forward-facing seats and harnesses must ride in booster seats in the rear of the vehicle until they are at least eight years of age and tall enough to use a regular seatbelt.

A child passenger who is eight or older and is at least 4’9” tall can use an adult seatbelt as long as:

Failure to abide by child safety seat laws is a primary offense for which a driver can be cited by police.

Most states in the U.S. follow a comparative negligence rule in personal injury cases. This means that you may recover compensation for your damages even if you are partially at fault in an accident primarily caused by another driver. Your award in such a case is reduced according to your percentage of liability, but you can still recover something.

Virginia, however, is one of only four states that follow a strict contributory negligence rule, which prevents you from recovering any damages if you are even one percent responsible for your own accident. If you’re not properly belted when involved in a crash caused by a negligent driver, you might fear that you’re partially at fault and not entitled to compensation for your damages, but this is not true. According to Virginia law, if you’re not at all responsible for causing the accident initially, your seatbelt violation:

This is true even if your failure to buckle up increases the severity of your injuries. Only if you were negligently at fault in some other way can your seatbelt infraction be held against you in an accident case.

Have You Been Injured in an Accident While Not Wearing a Seatbelt?

If so, you might still be able to file a claim against the at-fault driver’s insurance company for your damages. If the insurer does not offer a reasonable settlement, you may file a personal injury lawsuit and fight for fair compensation in civil court. In either case, the services of a lawyer are recommended due to the complexity of Virginia’s seatbelt laws and their exceptions.

In order to succeed with your insurance claim or prevail in your lawsuit, it’s essential that you prove complete liability on the part of the at-fault driver, whose insurer will do all it can to show partial responsibility on your part and deny your recovery. An experienced car accident attorney can investigate your wreck thoroughly to prove liability and make sure your seatbelt violation is not used against you. Contact us online or call us at 540-341-0007 to schedule your free consultation. You pay no attorney fees until we win your case.